I grew up with Silverside ( corned beef ) being cooked on the stove in a saucepan for a couple of hours.  Years later as a newly wed,  i took on this cooking practice because that was all I knew.

Years later I was given a slow cooker but no recipes to go with it.  That slow cooker sat in a kitchen cupboard unused for about nine years because I didn't know what it could do that a saucepan couldn't do.  It wasn't until I was visiting my cousin Louise in Ballarat that I discovered how to cook Silverside in the slow cooker.  Louise said the Silverside comes out tender and juicy.  I must admit I was surprised because the Silverside I'd been cooking was ok,  but a bit on the tough side.

Here's how I cook Silverside in the slow cooker -

*  Spray the insert of the slow cooker with canola spray.

*  Place the piece of Silverside into a preheated slow cooker.

*  Add all ingredients except the boiling water.

*  Add the boiling water until the slow cooker is almost full ( about 1 inch or 2.5cm from the top ).

*  Remove the Silverside from the slow cooker and wrap in foil for 30 minutes to retain the juices.

*  Unwrap the meat and allow to cool slightly then place in the fridge until completely cold.

*  Wrap in cling wrap or foil until ready to slice.

*  If your slow cooker cooks on a high heat ( boiling and burning ),  turn the slow cooker onto the low setting.  If it cooks on a low simmer then set the temperature on high.

*  The lemon is an optional extra but adds an amazing light citrus taste.

*  Spraying the slow cooker with canola spray helps with washing up afterwards.

*  The meat should be placed in the fridge as soon as the steam disappears.

*  Use a good sharp knife or electric knife o cut the meat.  It will have a slightly crumbly texture due to it's tenderness.

*  Serve hot or cold with salads or hot vegetables.

*  I personally keep the meat in the fridge for two days after cooing.

*  Can be sliced and frozen for future meals. 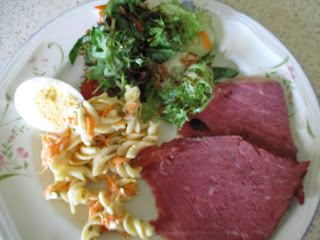