Potato Water And A Funny Story

Many years ago there was a tv show called Money For Jam.   Darren and I eagerly watched every episode hoping we'd learn some new ways to save money.  I remember seeing a lady on the show cleaning her saucepans with water from boiled potatoes.  At the time I thought this woman was mad.  Who in their right mind would clean saucepans with what I considered dirty water ?  REALLY !!!  Just clean them in the sink like everyone else !!!  I think I even said that to the tv.

A couple of years later I met Cath from The Cheapskates Club for the first time and had a wonderful afternoon with her.   Fast forward another three years and Cath and I became good friends doing workshops together.  At one of our regular visits I found out she was the potato water lady from Money For Jam.   We had a giggle over the saucepan story and Cath assured me potato water really does make saucepans shiny.

Each time I'd see Cath,  Darren would ask me if he should save our potato water for her.  It became a running joke between the two families.

Fast forward to 2017.  We have a new kitchen with a stainless steel stove top.  The stainless steel looks lovely but keeping it streak free is a challenge.  I've used metho,  miracle spray,  eucalyptus oil,  water,  Windex and mineral turps with microfiber cloths or paper towel.  Some worked better than others.

One night while cooking dinner the potatoes boiled over leaving water on the stove top.  After loading the dishwasher together,  Darren decided to clean the stove.  Using a piece of paper towel,  he wiped the potato water around the stove top.  By then I'd moved to another area of the house but I could hear Darren in the kitchen yelping " It's a miracle,  it's a miracle  The potato water really does work."  So I went into the kitchen to inspect his handiwork.  I must say,  I've never seen the stove look so clean and shiny.  Streak free too.  Darren insisted I tell Cath the next time I saw her.  When I told her she had a good giggle at Darren's potato water miracle.

So,  there are a  few morals to this story -

*  Don't laugh at crazy potato water ladies on tv.  They might end up becoming a good friend ( with a lot of common sense ).

*  Don't knock a frugal tip until you've tried it. 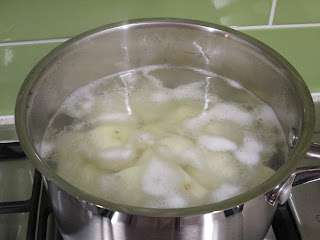