Life has started to slow down a little at the Gower Abundant Cottage.  All the engagement party leftovers have gone except those that have been put aside for Jessica's 21st birthday next month.  .

I've started making Jessica's invitations using what I already have on hand.  A list of food is forming in my mind and will be put down on paper next week.  Jessica has decided on an afternoon tea with family and close friends.  I can't wait to get out the lace table cloth,  cake stands and vintage plates to pretty up our dining table.

Darren has started painting the timber door trims a lovely alabaster white.  I must say I'm glad to get rid of the timber and go with a fresh look just in time for the party.

*  Washed and reused a few snap lock bags over and over again.  Although I try not to use disposable plastic,  sometimes the snap lock bags are handy space savers when out and about.

*  Jessica used one of the gift vouchers from her engagement party.  It was for a clothing and homewares clearance store local to us.  She was able to get lots of great things in the discounted section helping her gift card stretch further.

*  Refilled the hand wash pumps around the home with diluted shower gel.

*   Watered the mango plants with water saved In the kitchen ( water bottles etc ).

*  Fed the compost with kitchen scraps.  It's almost time for Darren to empty one of the bins into a veggie garden bed.

*  Made chicken stock in the slow cooker with a carcass.  I then turned it into a delicious chunky chicken and veg soup for dinner the next night.  I then froze four single serves for future dinners.

*  Picked a couple of bunches of white roses from the garden.  Used small juice bottles and jam jars as vases.

*  Sorted  out the sauces in the fridge and wrote a list of ones getting low.  I'll now wait until they come on sale before I restock.

*  Gave the pantry a mini sort out.  Started making notes of items to stockpile over the coming months ready for Jessica and Eugene as well as our family home.  I'll wait until some of the items come on sale like tinned soup ( for casseroles ),  tinned tuna,  savoury biscuits, baking items,  foil and cling wrap and cleaning cloths.

*  Donated a bag of clothes and household goods to Savers and received a discount stamp.

How did you save money is week ?

This is a very simple recipe that makes fluffy pancakes.  The original recipe said to use plain flour.but I wasn't happy with the results.  Changing to self raising flour gave the pancakes the lift they needed

Whisk the flour,  milk and egg in a medium bowl..
Heat a medium frypan to a medium / hot temperature..
Add the knob of butter and spread over the base with a spatula / lifter..
Pour approximately 1/2 a cup of batter to the centre of the frypan..
Move and tilt  the frypan around so that the batter spreads a little.
When bubbles form and burst in the batter, turn the pancake over and cook the other side
.
Serve with your choice of butter,  maple syrup,  jam,  icecream,  cream,  lemon,  sugar or a savoury topping. 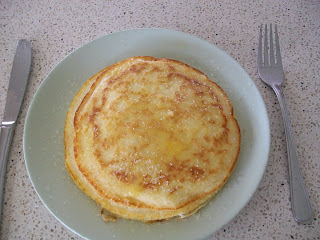 This post is a list of my frugal tasks over the last two weeks.  As you can imagine,  we've been super busy all month at the Gower Abundant Cottage.  Jessica and Eugene's engagement party was held last Saturday. Everything went smoothly and the hall looked lovely with the decorations Jessica and I had sourced from op shops,  discount stores,  holiday bargains and from around our home.

Here are the frugal tasks I've squeezed into my full days -

*  Jessica found a few as new coats and dress clothes at Savers op shop she can use for her teaching rounds.  Because she was there on a Sunday she received 20% off for being a student.

*  Made lots of sausage rolls and mini quiches for the engagement party.

*  Gratefully received lots of bread bags that I repurposed into bathroom bin liners.

*  Fed lots of bread crusts to the chickens.

*  Made a double batch of chocolate brownies for the engagement party.  Some was leftover which we enjoyed for afternoon tea.  The brownie was a huge hit at the party with requests for the recipe.

*  Bought bunches of flowers for the engagement party at the Dandenong Market. Baby's breath was half the price of florist's quoted prices.  The flowers were used to decorate the tables.  I arranged them in the Fowler's Vacola glass jars I picked up a couple of months ago at Savers for 60 cents each.  Jessica and Eugene will be keeping them as vases for their home.

*  Packed salad lunchboxes to eat while we were decorating the hall.  Others went out and got takeaway ( which is fine but we enjoyed the fresh salad ).

*  Saved the shower and washing machine water for each next load of washing.

*  Dried all but one load of washing on the line.  I needed to do a load of washing last Friday night ( the night before the engagement party ).  To make life easy and to avoid clothes horses with extra bodies coming in and out of our home,  the dryer was the best option ( for my sanity ).  I don't like using the dryer but that night it really helped me.

*  Ate leftovers form the party for two days.  There were lots of carrot sticks leftover so I diced and placed them in a beef casserole.

*  We received our electricity bill for the last three months.  There was a decrease of just under $20 for the same period last year.  This doesn't seem like much but power costs have increased considerably in twelve months.  Our wise usage has offset all increases.  The little usage table on the bill says we use less than the target amount of one person.  Not bad when there are two,  sometimes three living here.

*  Bought discounted bread at Coles for 38 cents a loaf.  Store bought bread tastes better with bbqs and is handy to have in the freezer.


*  Converted another $10 worth of  Flybuys points into dollars on our card. 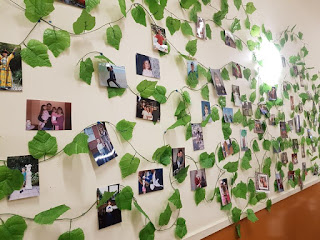 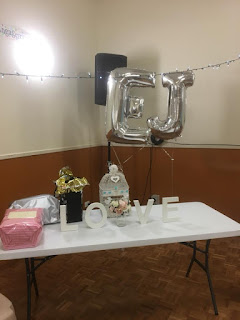 Present table with letters and flowers I found at the op shop.

What frugal tasks were on your list this week ?

This Week's Frugal Tasks Will Return

Due to an extremely busy week with work and engagement party preparations ( today is the day ),  I'm unable to post my frugal tasks.  To be honest,  I haven't had time to do much frugally except cook from scratch and find a few things at the op shop.

I'll post my list next Saturday as per usual.  I hope you'll understand and still post your own lists for others to read and be inspired.

Here are a few photos of our frugal lifestyle.

Did you have a frugal week ?

This recipe is an oldie but a goodie.  I grew up with this recipe served hot in Winter and cold in Summer as a wholesome dessert.

In a medium / large saucepan add the uncooked rice and a kettleful of boiled water.

Cook for approximately 10 minutes until tender.

Drain the water from the rice and return the rice to the saucepan.

Add the milk and sugar to the rice and stir.

Slowly bring the mixture to boiling point,  stirring very regularly to prevent it sticking to the bottom of the saucepan.

Once the rice reaches boiling point,  turn the heat down until it reaches a  gentle simmer.  Stir every 5 minutes.

Cook until the rice absorbs most of the milk which could be about 30 - 40 minutes.

Serve hot or cold with fruit,  on it's own or with a little bit of brown sugar or cinnamon on top. 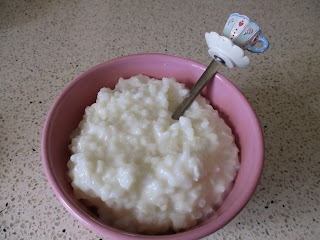 Darren,  Jessica and myself had a lovely weekend in Bendigo over Easter. The weather was just perfect,  the Bendigo Easter parade was amazing and we picked up a few bargains around town.  We also caught up with family and friends and spent some much needed time relaxing.

This mini holiday was a year in the making ( or planning ) which gave me lots of time to save for it.  I'm sure half the fun is in the planning and dreaming.

Due to our time away my frugal list is a bit on the short side this week.  I'm hoping your frugal lists will inspire me to get more done next week.

*  Used our thermos and ate home baking for a morning tea pit stop on our way up to Bendigo.

*  Bought lots of Lindt chocolate bunnies on sale in Kmart on Easter Monday for $2 each.  This is the cheapest I've ever seen them.  I bought enough for birthdays,  Christmas and Easter next year.

*  Took water bottles wherever we visited around Bendigo.  This saved us about $36 over the four days away.

*  Filled up and kept topping up my car with cheap petrol in Bendigo.  It was $1.18 per litre while Melbourne's prices were still around $1.47 per litre.

*  We took rolls for lunch and spag bol for dinner on the first day.  The second night we made pita bread pizza with items from our pantry and fridge.  Our snacks were homemade chocolate cake, homemade cranberry hootycreek biscuits and chips and chocolate from home.

*  Found some engagement party / wedding decorations in a shop called Provincial Home Living.  They are the wooden letters that is the latest trend.  We found them on clearance for $1 each and bought ' E ',  ' & ' and an  ' U ' which we'll turn into a ' J '.  The $1 price is a better price  than the discount shops.

*  Planted silverbeet seedlings in the garden.

*  Dried all washing on the line or clothes horses.

*  Stuck to the two light rule.  Turned off standby lights and power boards.

*  Saved the washing machine water and shower warm up water. 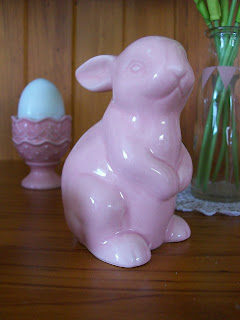 How did you celebrate Easter in your home ?

Were you still frugal during the holiday ?

The ' Use It Up ' Challenge Update

For the month of March we've been trying to use up items from around our home.  This is a great way to save money,  declutter and to feel like we are not wasting goods.

During the challenge I used up -

*  One lipstick by digging down to the very bottom with a cotton stick.- Value $8

*  Ate 8 single serves of leftovers from the freezer - Value $8

*  Decluttered the pantry and put aside items that need using up.  Darren is gradually making his way through the gnocchi,  nuts and rice cakes.  Value - $15

*  Used some guest soaps to add to  decorated hand towels.  This made  lovely packages to sell  at a  craft market a week or so ago.  From my understanding a couple of them sold to the value of about $14.

*  Reorganised the freezers to see what I have.  I wrote a menu plan to include a few bits and pieces - Value $10 in eaten items

Total value for the month $58


Did you use up anything from around your home ?