As a newlywed Anzac biscuits was the first  home baking I attempted and mastered.  Darren and I have always enjoyed these biscuits but my memory of Anzacs goes back even further.  As a thirteen year old in a high school Home Economics class,  I baked a similar version.  The teacher scored our ANZAC slice on color and neatness and I came out top of the class with a 10 out of 10.

The Australian history of Anzacs dates back to  World War 1.  Although it is unlikely these biscuits were sent to the front lines for the soldiers to eat,  they were commonly eaten at galas,  fetes and other public events.  This is where they were sold to raise money to support the war effort.

Combine oats,  flour,  sugar and coconut in a large bowl ( or a stand mixer ).
Place the butter,  honey and water into a glass jug and microwave on high for one minute until the butter has melted.
Add the bi carb of soda and stir until well combined. Add this to the dry mixture and combine well.
Place rounded teaspoons of mixture onto a greased baking tray and flatten with your fingers
Bake at 160 degrees Celsius for 20 minutes until golden
Lift from the trays when cool

*  I quite often double this mixture and freeze some dough for future baking.

*  The biscuits keep quite well in an airtight container for up to two weeks.  They will last longer but loose their freshness.

*  A durable biscuit for travelling. 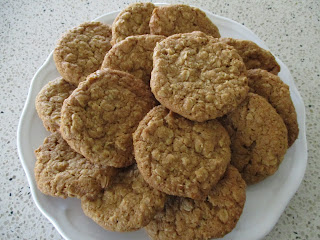 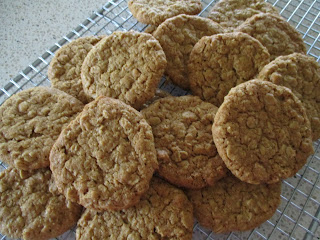