About 6 weeks ago I was in a local supermarket just as a staff member was putting reduced stickers on a few packages of meat.  I waited until he had finished before I pounced to grab a few bargains.  One of them was a packet of Barramundi fish. Although it was still a bit on the expensive side ( for us ),  I thought it would be a lovely treat that I knew Darren would certainly enjoy.

Because I already had dinner sorted for that night,  I popped the fish into the freezer to be eaten at a later date.  That later date was last week.  I had the veggies and rice  cooking,.  The zucchini slice was in the oven and it was time to start cooking the Barramundi.  As it was cooking in the pan,  I thought I'd better check the packet to make sure I was doing it right.  In very small print at the bottom of a fair bit of writing was the dreaded words ' Do Not Freeze '. I'm assuming this means the fish was bought into the store frozen and then defrosted on the shelf.

I couldn't believe it.  That very important piece of information was so obscure most people wouldn't notice it.  With the rest of the meal ready to serve,  I panicked.  I didn't have any other meat defrosted or easy to cook within minutes.  So Darren said he'd pop up to the supermarket to get a cooked chicken.

Ten minutes later I get a phone call from Darren.  He informed me there were no cooked chickens available.  I panicked again.  Then I remember another frugal mum saying that Coles offers a free chicken at a later date if none are available between the hours of 9am - 8pm.  Darren was there right on 8pm.  So I passed this piece of info on and suggested he quickly find someone to help him.  He was able to get the voucher but it still didn't help me serve a complete dinner.

I asked Darren to grab any piece of meat that was under $10 a tray but secretly hoping it was much cheaper.  He came home with a tray of beef sizzle steaks for just under $10  There were six on the tray and although they were small,  eating two each  would be a costly meal.  By now I could see money going down the drain and I was trying to stop the flow.  The other elements of the meal had cooled,  gone soggy or over cooked.  NOT MY FINEST HOUR  !!!

There has to be a moral to this sad story.  After all,  I  always try to help you save money.

Don't buy reduced  meat unless you've read the fine print on the packet.

Don't buy reduced bakery items unless you've read the fine print.  Many bakery item are also bought into the store frozen then defrosted on the shelf.

Not all items are suitable for freezing even though they usually would be. 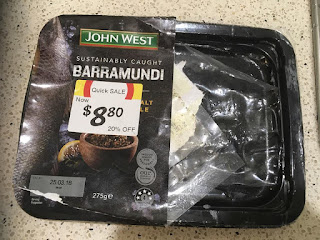