I will admit I had a much slower week this week.  I only worked two days and spent a few days just relaxing and doing nothing much but watching tv and having  Nana naps.  After the busyness of last week,  I really needed the rest.  Here's what I managed to do when I wasn't resting -

*  Gratefully received more Moccona coffee jars through Facebook.  I gave a handmade greeting card for each jar I received.  I've almost completed replacing the plastic in my pantry.

*  Made up a jar of dry crumble topping mix to make delicious easy desserts.

*  Saved the warm up water from the shower.

*  Fed the compost bin every second day with kitchen scraps.

*  Gratefully received dried parsley,  sage and thyme from our card making group swap table.  I also received some greeting cards to cut up and repurpose into new cards.

*  Went to Hindustan Imports to stock up on bulk herbs and spices.  They are so much cheaper than supermarket prices.

*  Gratefully received a zucchini plant from my Dad.

*  Made up a big jar of brown sugar using white sugar and molasses.

*  Dried the washing on the line and clothes horses outside.

*  Made a double batch of ANZAC biscuit dough.  Some of the dough was baked for our snacks,  some was baked and given as a birthday present in a Tupperware container and the rest of the dough went into the freezer.

*  Jessica offered to buy a couple of groceries to help stock up the fridge.  Coles didn't have any roast chickens  left for sale so Jessica asked for a voucher for a free one.  Darren picked it up a couple of nights later and we had it  with salad while the weather was warm.  The bones were put into the slow cooker to make stock.

*  Cheap meals this week were - homemade pizza and the two meals with the free chicken.

*  Finished off 30= greeting cards that were started over the last year or so.  They have been put into cello bags ready to give as swaps for jars and for donating to our local op shop.

*  Darren picked quite a few roses from our garden to put on my bedside table  Their scent is beautiful. 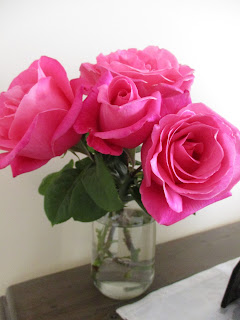 How did you save time or money this week ?