My list is not as long as it usually is this week. I've been busy with Mother's Day preparations,  work,  sickness in the house and getting ready for the Cheapskate's one day workshop today.  I received some lovely Mother's Day presents.  I asked for card making supplies and a paper cutter.  SO EXCITING !!!!.  Here's what I got up to this week -

*  Cut up some scrap netting and soft tulle to use as ties and bows for some Mother's Day presents.

*  Recycled all kitchen scraps.  I divided them between the compost bin,  the worm farm and the chickens.

*  Gratefully received some glass jars from my friend Leesa.  Thankyou so much.  You know how much I love those jars ( and given on Mother's Day too ).  xoxo

*   Made a double strength batch of Miracle Spray.

*  Saved a cereal bag to cut up as go - between for chops,  hamburgers and portions of frozen soup.

*  Dried as much washing as possible on clothes horses.

*  Darren gave me two gardening catalogues so I could cut out the pictures to make cards.  I've already started cutting.

*  Saved the wrapping paper,  bubble wrap and one envelope from my Mother's Day presents.

*  Bought four gift bags for 37 cents each and two rolls of ribbon for 75 cents each from Woolworths.  They were clearing out some Mother's Day stock this week.  When I get a chance I'll have a look in Coles.

*  Gave Cranberry Hootycreek biscuits as part of the Mother's Day presents for my Mum and Mother In Law.

*  Darren grew some chrysanthemums from cuttings to give to our Mums.  I used plastic wrap'I'd saved from Megan's baptism flowers and tied it with ribbon I had on hand.  They look just beautiful and didn't cost us anything but time and love.  Both Mums loved them.

*  Juiced some lemons and froze the juice in ice cube trays. 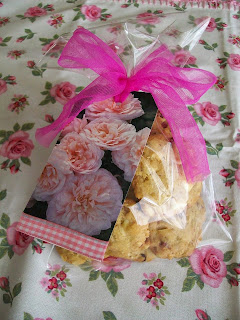 What frugal tasks did you complete this week ?